This indicator is an index of habitat suitability for three pine bird species based on observational data and predictive models.Reason for SelectionThis species index represents the structure and function of pine ecosystems in the Southeast. The presence of all three species indicates high pine ecosystem quality.Input Data– Blueprint 2.1 ecosystem map (see Appendix A)–The distribution of red-cockaded woodpecker (Picoides borealis), Northern bobwhite (Colinus virginianus), and Bachman’s sparrow (Aimophila aestivalis) are included in the index.Northern BobwhiteTo model the distribution of bobwhite, the National Bobwhite Technical Committee used an extensive series of initial and revision workshops, where a multitude of experts conducted [...]

This indicator is an index of habitat suitability for three pine bird species based on observational data and predictive models.

To model the distribution of bobwhite, the National Bobwhite Technical Committee used an extensive series of initial and revision workshops, where a multitude of experts conducted a spatially explicit habitat ranking based on GIS data and local expert knowledge (The National Bobwhite Technical Committee 2011). Bobwhite habitat suitability was ranked from low to high; for our purposes, we used the highest ranking, “high,” as a conservation target (i.e., 0/1).

RCW data were primarily obtained from NatureServe (2014) with cooperation from state Natural Heritage programs of Virginia, North Carolina, South Carolina, Georgia, Alabama, and Florida. Important supplemental data were supplied by Francis Marion National Forest in South Carolina and Tall Timbers Research Station in Florida. We removed records classified as “extirpated” and records with > 2 km of potential location error. Of the remaining locations, we used RCW data when the last recorded observation was 1990 or later. This long timeframe was necessary because private land surveys are often not repeated, Federal and state agreements with landowners may restrict data access, and there is often a substantial lag time for reporting monitoring data on public lands. Locations where RCWs were last observed from 1970-1989 were often noted as inactive nest cavities or had been surveyed later without finding evidence of RCWs. In contrast, post-1990 data were typically active clusters, although many had not been surveyed regularly. Since the extent of habitat was not always recorded, we also used the point locations, or plotted a point at the center of RCW polygons, and placed a 2 km radius buffer around each point. An 800 m buffer has been suggested and used for RCW locations (James et al. 2001, U.S. Fish and Wildlife Service 2003), but here, we wanted to extend this to account for location errors. We did not include RCW locations within the forested wetland ecosystem east of the Suffolk Scarp of North Carolina (i.e., pocosin habitat), as indicators were restricted to the historic range of the longleaf pine savanna.

Bachman’s sparrow locations were recorded in three distinct survey projects conducted by the North Carolina Wildlife Resources Commission (NCWRC) (n = 544; 2006-2013), Paul Tallie et al. (2015) (n = 99; 2012), and a Virginia Tech study in cooperation with the U.S. Marine Corps at Camp Lejeune (n = 84; 2010). Paul Taillie (NCWRC), Jeffrey Marcus (The Nature Conservancy), Scott Anderson (NCWRC), and John Carpenter (NCWRC) collected data and summarized existing data sources. Data were collected as part of species-specific point count surveys with call-backs, general point counts, and as incidental observations. Points within 250 m of another presence location were removed from the dataset. Fires were quantified from the [LANDFIRE program]http://www.landfire.gov/() (also known as the Landscape Fire and Resource Management Planning Tools). The National Land Cover Database (NLCD) classifications of evergreen forest and a combined layer of shrub/scrub and grassland/herbaceous depicted coarse land cover classes. Tree canopy cover was quantified with NLCD. All of these variables were calculated with 3x3 and 9x9 neighborhood statistics. Connectivity was quantified using local connectedness from The Nature Conservancy’s Southeastern Terrestrial Resilience dataset (Anderson et al. 2014). This connectivity measure emphasized fragmentation caused by agriculture and urban development. After initial model development, we calculated the amount of habitat within a 5 km radius and included this result in the model.

A resource selection function (RSF) modeling approach was used (Boyce et al. 2002) with pseudo-absences dispersed throughout the survey extent; row crop agriculture and urban classifications (NLCD land cover classes 21-24) were excluded. A logistic regression compared Bachman’s sparrow presence with pseudo-absence points. This compared Bachman’s sparrow habitat use vs. availability. As results of logistic regression are not directly relevant to assessing a resource selection function, data were divided into training data (60%) and validation data (40%). RSFs are relative measures of habitat use, but we wanted to determine a threshold for estimating presence/absence. Similar to other studies (Wilson et al. 2013, Fedy et al. 2014) we determined the optimal classification threshold with the training data, and applied it to the validation data. We were primarily interested in how well the model performed in predicting presence and the proportion of area predicted.

Models used as inputs to this indicator were initially computed, or in the case of existing data, resampled to 1 ha spatial resolution using the nearest neighbor method. For computational reasons, we then used the ArcGIS Spatial Analyst-Aggregate function to rescale the resolution to 200 m. The aggregate function avoided loss of detail by taking the maximum value of each cell in the conversion (e.g., species presence).

The final pine bird index was derived by summing the number of species in each 200 m cell. We then clipped the results to the pine & prairie class in the Blueprint 2.1 ecosystem map.

To use this indicator in the Blueprint 2020, we just resampled the data from 200 meters down to 30 meters to match the new resolution.

The indicator is classified as follows:

– The model only incorporated Bachman’s sparrow presence data from North Carolina and used it to predict the indicator for the whole South Atlantic geography. More data is needed to validate this extrapolation. However, habitat variables were chosen with specific reference to Bachman’s sparrow ecology. Fires, canopy cover, evergreen trees, and fragmentation are all known to be factors affecting Bachman’s sparrow throughout the Southeast. Definitive absence data would be helpful for verifying the presence/absence threshold chosen here. The 90% accuracy of the model in North Carolina shows that the model is of high quality, but 10% error is still expected. The data should not be treated as a complete census.

– For RCWs, data is near census level, but data from private lands may be limited in a few localities. Some locations post-1990 could use a more recent verification. Additionally, some data on RCW locations post-1990 are likely still missing from this indicator.

– The Northern bobwhite model does not provide quantitative abundance estimates. The bobwhite model is based on expert opinion and likely has issues in places where consulted experts had less experience.

– The spatial resolution of the source data has been degraded. While this layer has a 30 m resolution, it was not created directly from the spatially precise input data. Here, we resampled the 200 meter resolution data used in the previous version of the indicator back down to 30 meter resolution so that we could use it in our optimization software.

Taillie, P. J., M. N. Peterson, and C. E. Moorman. 2015. The relative importance of multiscale factors in the distribution of Bachman’s Sparrow and the implications for ecosystem conservation. The Condor 117:137-146. 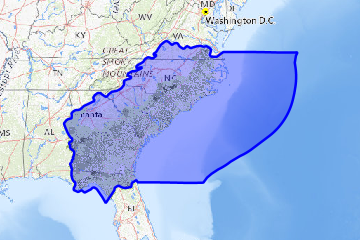