This indicator is an index capturing how far upstream migratory fish have been observed. It also includes adjacent areas where habitat access could be restored through fish passage and hydrological barrier removal efforts.

– Estimated Floodplain Map of the Conterminous U.S. from the EPA EnviroAtlas (see this factsheet for more information)

1) We used HUC 12 watershed boundary dataset polygons to dissect the polygons representing functional catchments (from the Southeast Aquatic Connectivity Assessment Project), using the Intersect function in ArcGIS. This sliced up the functional catchments into HUC12 sized pieces and reduced the area selected in step 2.

3) We converted the polygon layer created above to a raster with 30 m cell size using the ArcGIS “Polygon to Raster” tool with a cell assignment type of “maximum combined area”.

4) We intersected the above raster with the EPA Estimated Floodplain map to limit the results to the floodplain associated with each functional network.

Indicator values were assigned as follows:

Functional Network:SEACAP developed linear spatial data on the presence of priority diadromous species. These layers are modified versions of the NHDPlus Version 2. These data were altered to contain presence of Alabama Shad using data from the Atlantic States Marine Fisheries Commission (produced for the ASMFC by the Biodiversity and Spatial Information Center at North Carolina State University, Alexa McKerrow), and expert knowledge of the SEACAP Workgroup.

The EPA Estimated Floodplain Map of the Conterminous U.S. displays “…areas estimated to be inundated by a 100-year flood, also known as the 1% annual chance flood. These data are based on the Federal Emergency Management Agency (FEMA) 100-year flood inundation maps with the goal of creating a seamless floodplain map at 30-meter resolution for the conterminous United States. This map identifies a given pixel’s membership in the 100-year floodplain and completes areas that FEMA has not yet mapped.”

– Overestimates species ranges in some areas (e.g., above Blewett Falls and High Rock Dam in the Pee Dee, upstream of Rocky Mount, NC).

– Underestimates species ranges in other areas (e.g., Atlantic Sturgeon range upstream of the confluence of the Altamaha river)

– In certain cases, when calculating adjacency to presence of migratory fish connectivity index species, GIS processing steps may erroneously include in a species’ range stream segments that are nearby, but not hydrologically connected.

– The EPA Estimated Floodplain layer sometimes misses the small, linear connections made by artificial canals, especially when they go through areas that wouldn’t naturally be part of the floodplain. As a result, some areas (like lakes) that are connected via canals may appear to be disconnected, but still receive high scores.

–While this indicator generally includes the open water area of reservoirs, some open water portions of Kerr Lake are missing from the estimated floodplain dataset.

–This indicator does not account for the habitat quality of the connections. 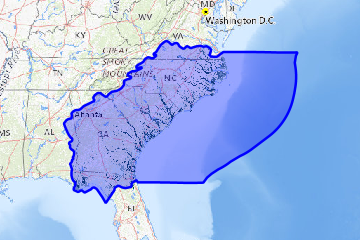