Three types of polygon feature layers are contained in the geodatabase, and species-specific polygons are named using five letter codes based on the species name (e.g., Gopherus polyphemus = GOPOL). First, features with the names "HSI_xxxxx" represent all areas of habitat that were classified by each species' habitat suitability model as low, moderate, or high suitability. Second, features with the names "HSI_xxxxx_100" represent contiguous areas of low, moderate, and high suitability that were greater than 1 square-km or 100 hectares in size. Third, the geodatabase also includes a polygon indicating large areas (> 1 square-km) whose attributes indicate the number of species out of five for which the area was predicted to be suitable (named "HSI_all_overlap100", see accompanying publication). All three types of features include attributes to indicate if the patch falls on protected areas.

These data were developed to support the Species Status Assessments conducted by the U.S. Fish & Wildlife Service and conservation planning for State, Federal, and non-government researchers, managers, landowners, and other partners for the five focal herpetofauna species. The raster and polygon vector data in the geodatabase are suitable for use in Geographic Information Systems (GIS) or other database and geospatial software. The data provide information on current (as of 2018) predicted habitat suitability for each of the five focal species within their combined ranges in the Southeast. The data may be used to develop maps, perform geospatial analyses, or to inform planning of survey, management, or other decisions in the areas covered by the data. 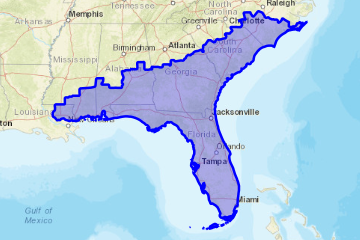