The representative species datasets collectively are components of the Nature’s Network project (naturesnetwork.org). Nature’s Network is a collaborative effort to identify shared priorities for conservation in the Northeast, considering the value of fish and wildlife species and the natural areas they inhabit.

These datasets are primarily intended to be used in conjunction with the Landscape Capability for Representative Species models to understand how habitat conditions could change in the future for this species. When used in conjunction with the Climate Response for Representative Species models, 2080, they can be used to identify potential climate refugia for the species as well as areas where the species may be most vulnerable to climate change. To the extent that other co-occurring species may share a similar response to climate, it may also be applicable to these species as well.

You might explore these products in combination with the following other Nature’s Network products:

Detailed technical documentation for the derivation of this and related representative species products is available at: http://jamba.provost.ads.umass.edu/web/lcc/DSL_documentation_species.pdf.

As with any project carried out across such a large area, the dataset is subject to limitations. The results by themselves are not a prescription for on-the-ground action; users are encouraged to verify, with field visits and site-specific knowledge, the value of any areas identified in the project. Known issues and uncertainties include the following:

This dataset is a depiction of three zones of uncertainty in the predicted future distribution of this species based on climate suitability, given the projected climate in 2080 (averaged across RPC 4.5 and 8.5 climate scenarios). The “Zone of Persistence” represents those areas where the species is expected to continue to occur through 2080. The “Zone of Contraction” represents those areas that are currently suitable from a climate perspective but where the 2080 climate is projected to be no longer suitable. The “Zone of Expansion” represents those areas where current climate is unsuitable but future climate is projected to become suitable by 2080. Compared to the Zone of Persistence, uncertainty is higher as to whether the species will occur in the Zones of Contraction or Expansion in 2080. 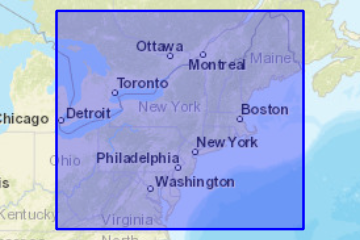