Temperatures are warming fastest at high latitudes and annual temperatures have increased by 2-3˚ C in the Arctic over the second half of the 20th century. Shorebirds respond to cues on theiroverwintering grounds to initiate long migrations to nesting sites throughout the Arctic. Climatedrivenchanges in snowmelt and temperature, which drive invertebrate emergence, may lead to alack of synchrony between the timing of shorebird nesting and the availability of invertebrateprey essential for egg formation and subsequent chick survival. To explore the drivers andpotential magnitude of climate-related shifts in the availability of invertebrate prey, we modeledthe biomass of invertebrates captured in modified Malaise traps as a function of [...] 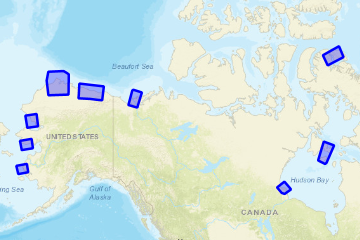