Welcome to the Conservation Blueprint 1.0 Map on the Conservation Planning Atlas! The Blueprint is a living spatial plan for responding to future changes like urban growth, sea level rise, and climate change. More than 300 people from 85 organizations were actively involved in developing this version of the Blueprint. This mapping interface, hosted on the Conservation Planning Atlas, is designed to help inform conservation decisions by allowing you to explore the Blueprint and add data layers.  You’ll find information on priority areas, recommended actions, and other spatial data relevant to conservation planning.
Learn more about the Blueprint
Looking for something less complicated? Try the Simple Viewer
Background
The lands and waters of the South Atlantic are changing rapidly. Climate change, urban growth, and increasing human demands on resources are reshaping the landscape. While these forces cut across political and jurisdictional boundaries, the conservation community does not have a consistent cross-boundary, cross-organization plan for how to respond. The South Atlantic Conservation Blueprint will be that plan.
Potential uses
Uses under discussion include: Finding places to pool resources, raising new conservation dollars, guiding infrastructure development, developing conservation incentives, showing how local actions fit into a larger strategy, and locating places to build resilience to major disasters

Development
In March 2012, developing a Conservation Blueprint became the 3 - 5 year mission of the South Atlantic LCC. In March 2013, the cooperative adopted Natural Resource Indicators (and shortly after Cultural Resource Indicators) as shared measures of success. The cooperative also created a Conservation Design Team (Design experts who typically lead large landscape design efforts) and a User Team (Potential “early adopters” of the Blueprint who either directly make conservation decisions or are one step removed) to guide the Blueprint development process

Nearshore waters to open ocean
During Spring 2014, following up on the regional workshops, the cooperative held virtual workshops to extend the Blueprint coverage 200 miles into the Atlantic ocean to cover the Marine extent of the LCC. Workshop participants  started from Outer Continental Shelf Lease Blocks that were Essential Fish Habitat - Habitats of Particular Concern and used both their expert knowledge and supporting geospatial layers to add and modify blocks and actions within blocks that should be part of the Blueprint.

Highest priority
Given that these subwatersheds received the highest scores from both the workshop integration and the integration of existing conservation plans these areas are likely to remain important places for shared conservation action into the future.

High priority
While there’s strong evidence for these subwatersheds being important for shared conservation action, their priority level may change in future versions of the Conservation Blueprint

Further investigation
Since these subwatersheds have strong disagreement between the workshop integration and the integration of existing conservation plans, there’s uncertainty about whether they should be a high or low priority.

Low priority
While these subwatersheds may have important conservation value, they are a lower priority compared to the “No regrets” and “High priority” categories.

Further investigation
Outer Continental Shelf Lease Blocks where workshop participants disagreed about whether or not they should be included in the Blueprint. These areas require further investigation to determine their relative priority. 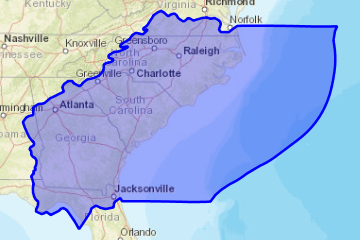