These data represent a potential Conservation Target (CT) for PFLCC's Priority Resource (PR): Connectivity. Wide-ranging species are an important component for Connectivity in Florida. The data layer represents the predicted distributions of three wide-ranging species in Florida -- the Florida Black Bear, Florida Panther, and the Eastern Indigo Snake. PFLCC's Connectivity Priority Resource is based on the Florida Ecological Greenways Netword's Greenways layer -- Bear and Panther Connectivity are part of the consideration for the original layer.

The predicted distribution for the Florida Black Bear and the Florida Panther were derived from the Wildlife Habitat Conservation Needs in Florida (see 2009 publication) but updated in 2016 with the Cooperative Land Cover Version 3.2. Potential-habitat maps for each focal species identify all potential habitats in Florida. For each species, we generated a binary raster of potential habitat with 30- x 30-m resolution. For this analysis, predicted distributions were resampled to 15 m x 15 m to match other layers in the PFLCC Conservation Planning Atlas, however the actual resolution and uncertainty remain at 30 m x 30 m.

The Eastern Indigo Snake predicted distribution is part of a project delineating potential habitat of federally listed species (2015). The original data layer shows probability of occupancy, which was converted to a binary layer to match other potential habitat layers using the recommended threshold value of .5.

The three predicted distributions were combined using Raster Calculator to determine the overlap of distributions in Florida. To determine the portions that lie within the Connectivity PR, the layer was used as a mask to extract the pixels that lie within the PR. For preliminary summaries of the extracted values, see also the "Connectivity Initial Investigation of Potential Conservation Targets" webinar (pdf) located within this gallery. 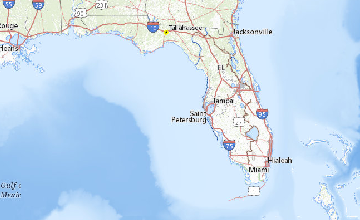