These dataset are part of a suite of products from the Nature’s Network project (naturesnetwork.org). Nature’s Network is a collaborative effort to identify shared priorities for conservation in the Northeast, considering the value of fish and wildlife species and the natural areas they inhabit. "Important Anadromous Fish Habitat" and “Atlantic Salmon Rearing Areas, Maine” are two input used in developing “Lotic Core Areas, Stratified by Watershed, Northeast U.S.” that is also part of Nature’s Network. Lotic core areas represent intact, well-connected rivers and stream reaches in the Northeast and Mid-Atlantic region that, if protected as part of stream networks and watersheds, will continue to support a broad diversity of aquatic species and the ecosystems on which they depend. The combination of lotic core areas, lentic (lake and pond) core areas, and aquatic buffers constitute the “aquatic core networks” of Nature’s Network. These and other datasets that augment or complement aquatic core networks are available in the Nature’s Network gallery: https://nalcc.databasin.org/galleries/8f4dfe780c444634a45ee4acc930a055.

This dataset is a combination of the following two products:

2) Top 5% of watersheds for alewife, blueback herring, and American shad (collectively referred to as “alosids”).

This component of the product consists of streams and rivers in the top 5% of watersheds for conservation action for river herring (alewife and blueback herring) and American shad, based on a prioritization developed by The Nature Conservancy (TNC). The 2015 TNC analysis is intended to identify areas of high anadromous fish conservation potential along the Atlantic Coast. For the analysis, a suite of metrics was calculated in each subwatershed (USGS 12-digit hydrologic units or “HUC12s”) of the U.S. Atlantic Coast to measure population and habitat factors which are relevant to these fish. The high priority subwatersheds are areas where conservation activities to support these fish could have the greatest impact. They are intended as a regional-scale screening tool to be used in concert with local-scale information and expertise; they are not a prescription for any particular management action.

The metrics used in the alosid analysis fall under four categories:

2) Habitat Quantity and Access – e.g., wetland extent, percent of stream reaches in the subwatershed with unrestricted downstream access (no barriers) to the ocean

These factors were then weighted by importance for each species based on expert knowledge. The results of the simple weighted ranking prioritization algorithm were then binned into 5% tiers for each species; the top tier is considered to have the greatest restoration potential. The top tiers for each of the three species were also combined to result in a combined Top 5% representing the highest tier for one or more of the three species. The metrics and results can be viewed on the Fish Habitat Decision Support Tool, http://www.fishhabitattool.org/, in the Atlantic Coastal Fish Habitat Partnership section.

This dataset is primarily intended to be used in conjunction with the Nature’s Network product “Lotic Core Areas, Stratified by Watershed, Northeast U.S.” to better understand the importance of core areas to Atlantic salmon. It also can be used on its own, or in conjunction with the dataset “Important Anadromous Fish Habitat, Northeast U.S.” to identify priority watersheds for anadromous fish.

The dataset consists of stream reaches that are predicted to contain greater than 10% Atlantic salmon rearing habitat, based on a GIS-based habitat model developed by the U.S. Fish and Wildlife Service and the National Oceanic and Atmospheric Administration (NOAA). The model assesses salmon rearing habitat throughout the range of the Gulf of Maine Distinct Population Segment (DPS) of Atlantic salmon, which is federally listed as an endangered species. The model was developed using data from habitat surveys conducted in the Machias, Sheepscot, Dennys, Sandy, Piscataquis, Mattawmkeag, and Soudabscook Rivers. The model uses reach slope derived from contour and digital elevation model (DEM) datasets, cumulative drainage area, and physiographic province to predict the total amount of rearing habitat within a reach. The variables included in the model explain 73% of the variation in rearing habitat. More details about the model are available at: https://www.greateratlantic.fisheries.noaa.gov/prot_res/altsalmon/Appendix%20C%20-%20GIS%20Salmon%20Habitat%20Model.pdf.

As with any project carried out across such a large area, this dataset is subject to limitations. The results by themselves are not a prescription for on-the-ground action; users are encouraged to verify, with field visits and site-specific knowledge, the value of any areas identified in the project. Known issues and uncertainties include the following (see Dauwalter et al. 2012 for additional information about limitations): -The results do not incorporate important social, economic, or feasibility factors. -Fish distributions are known to be dynamic over time, and the distribution data represent a snapshot in time. -Likewise, the historical distributions of species are inherently difficult to define. The absence of a species from a subwatershed should not be considered absolute until additional, local data sources can be referenced. -The location and impacts of dams on aquatic connectivity are known to be incomplete across the region and this limits the ability to accurately prioritize watersheds for conservation. Other issues such as errors in mapping and alignment of hydrography, impervious surfaces, and a number of other data layers can affect the results of the alosid prioritization. -The models is based primarily on variables derived from a digital elevation model, and results are affected by uncertainties associated with the digital elevation model as well as other unmeasured factors that may also affect the suitability of stream reaches for salmon. -The model is intended to depict potential suitability of habitat for salmon, and does not take into account the presence of dams and other barriers that currently may limit access of salmon to rivers and streams. 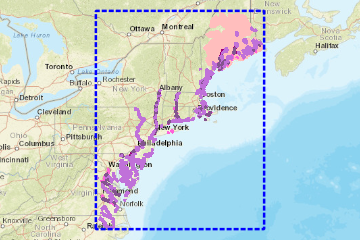