The U.S. Geological Survey (USGS), in cooperation with Gwinnett County Department of Water Resources, established a Long-Term Trend Monitoring (LTTM) program in 1996. The LTTM program is a comprehensive, long-term, water-quantity and water-quality monitoring program designed to document and analyze the hydrologic and water-quality conditions of selected watersheds in Gwinnett County, Georgia. Water-quality monitoring initially began in six watersheds and currently [2016] includes 13 watersheds.As part of the LTTM program, streamflow, precipitation, water temperature, specific conductance, and turbidity were measured every 15 minutes for water years 2001–15 at 12 of the 13 watershed monitoring stations and for water years 2010–15 at [...]

As part of the LTTM program, streamflow, precipitation, water temperature, specific conductance, and turbidity were measured every 15 minutes for water years 2001–15 at 12 of the 13 watershed monitoring stations and for water years 2010–15 at the other watershed. In addition, discrete water-quality samples were collected seasonally from May through October (summer) and November through April (winter), including one base-flow and three stormflow event composite samples, during the study period. Samples were analyzed for nutrients (nitrogen and phosphorus), total organic carbon, trace elements (total lead and total zinc), total dissolved solids, and total suspended sediment (total suspended solids and suspended-sediment concentrations). The sampling scheme was designed to identify variations in water quality both hydrologically and seasonally.

The 13 watersheds were characterized for basin slope, population density, land use for 2012, and the percentage of impervious area from 2000 to 2014. Several droughts occurred during the study period—water years 2002, 2007–08, and 2011–12. Watersheds with the highest percentage of impervious areas had the highest runoff ratios, which is the portion of precipitation that occurs as runoff. Watershed base-flow indexes, the ratio of base-flow runoff to total runoff, were inversely correlated with watershed impervious area.

Streamwater loads were estimated annually for the 13-year period water years 2003–15 for the same 10 constituents in the trend analysis. Loads were estimated using a regression-model-based approach developed by the USGS for the Gwinnett County LTTM program that accommodates the use of storm-event composited samples. Concentrations were modeled as a function of discharge, base flow, time, season, and turbidity to improve model predictions and reduce errors in load estimates. Total suspended solids annual loads have been identified in Gwinnett County’s Watershed Protection Plan for target performance criterion.

Although the amount of annual runoff was the primary factor in variations in annual loads, climatic conditions (classified as dry, average, or wet) affected annual loads beyond what was attributed to climatic-related variations in annual runoff. Significant negative trends in loads were estimated for the combined area of the watersheds for all constituents except dissolved phosphorus, total organic carbon, and total dissolved solids. The trend analysis indicated that total suspended solids and suspended-sediment concentration loads in the study area were decreasing by 57,000 and 87,000 pounds per day per year, respectively. 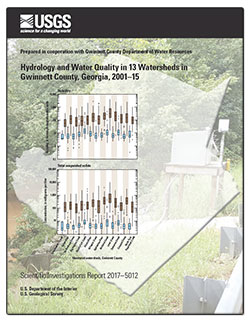