Beach Birds This layer is one of the South Atlantic LCC indicators in the beach and dune ecosystem. It is an index capturing observed abundance of four shorebird species. Reason for Selection This index represents a variety of ecosystem features and the species selected are already being monitored for the entire region by state and Federal agencies. Input Data Wilson's Plover and American Oystercatcher Betsy Von Holle (University of Central Florida) led a project that included state waterbird biologists in the South Atlantic: Tim Keyes, Felicia Sanders, Sara Schweitzer, and Janell Brush. They mapped habitat suitability based on nest, or breeding pair, density per beach segment, as was used for Von Holle et al.'s sea turtle research. [...]

Beach Birds
This layer is one of the South Atlantic LCC indicators in the beach and dune ecosystem. It is an index capturing observed abundance of four shorebird species.
Reason for Selection
This index represents a variety of ecosystem features and the species selected are already being monitored for the entire region by state and Federal agencies.

Least Tern
The point locations and number of least tern nests, or breeding pairs, were provided by waterbird biologists from each state's natural resource department (Tim Keyes, Felicia Sanders, Sara Schweitzer, and Janell Brush). All least tern locations were buffered by 1 km. Although least tern do not actively forage on the beach itself, the buffer characterizes habitat selected by least tern (i.e., beach width, predator abundance, etc.) and accounts for interannual variability in nesting locations. Among years, data showed least tern often shifted the location of nests in the general vicinity of previous years.

Piping Plover (Winter Distribution)
The 2011 winter population census of piping plover was provided by the U.S. Geological Survey, as the international census is repeated every five years. Locations were buffered with a 2 km radius. Although home range estimates exist for piping plover, (Cohen et al. 2008, Drake et al. 2001) these measures depict primarily linear habitats. We used a 2 km buffer, as this is similar to the mean linear distance of 4.2 km that piping plover moved during winter in Texas (Drake et al. 2001). The resulting buffer was also substantiated by maps in Cohen et al. (2008).

Indicators that have not changed since Blueprint 2.0 were initially computed, or in the case of existing data, resampled to 1 ha spatial resolution using the nearest neighbor method. For computational reasons, we then used the ArcGIS Spatial Analyst-Aggregate function to rescale the resolution to 200 m. The aggregate function avoided loss of detail by taking the maximum value of each cell in the conversion (e.g., species presence).

1) Von Holle et al. used a categorical habitat suitability ranking based on six quantiles of nest density, or breeding pair density, for each species on the Atlantic Coast. We converted these to numeric rankings ranging from 0 (absent) to 6 (high density). We expanded the approach by ranking least tern nest abundance in the South Atlantic LCC based on quantiles (0–6). Piping plover individuals were also ranked by quantile (0–6).

2) The beach bird index was developed by using the software program Zonation with the core-area algorithm and without the edge removal option (edge removal = 0). Zonation starts with all potential beach habitats and iteratively removes each cell that results in the least loss of species. The rankings (0–6) described above were used as a measure of relative abundance for all species; no connectivity options were used. The values in this layer represent relative use of habitat for beach nesting birds in the South Atlantic. Fundamentally, areas with higher values in this layer have greater abundance of beach nesting birds in the index than areas with lower values.

The final indicator is continuous, with values ranging from:

Defining the Spatial Extent of Ecosystems
This indicator has been clipped to the beach and dune ecosystem. Visit the Blueprint 2.1 ecosystem maps page for an explanation of how each ecosystem’s spatial extent is defined.

Known Issues
-- Beach bird survey data are summarized by beach segment and do not account for variations in density within those segments.
-- Volunteers often collect beach bird data in discrete time frames and survey effort may differ by location. Some areas may not have been surveyed or nests may have been missed. Therefore, this data does not imply absence of species.
-- Because we did not have the exact quantile breaks used for habitat suitability on the Atlantic coast, different methods between Atlantic and Gulf regions of this indicator may cause issues when comparing scores.
-- Red knot is not included due to lack of data.
-- This indicator does not capture variations in beach bird use of dune areas inland of beach segments.

Disclaimer: Comparing with Older Indicator Versions
While this indicator has changed since the version of beach and dune birds used in Blueprint 2.0 and 2.1, this only reflects differences in the way it was calculated and should not be compared to measure change over time. 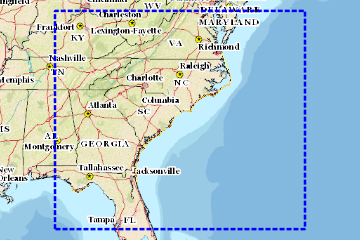