Collections of fishes used for data analyses in the project:Historic and Current Habitat Use by Arkansas River Shiner in the South Canadian River in Central Oklahoma as Affected by River Flow: Predictions for Habitat Under Future Climate Scenarios”. Edie Marsh-Matthews and William J. Matthews. Funded and published by the Great Plains Landscape Conservation Cooperative.Collections were all made by seines of a variety of sizes and mesh widths (details for collections are in the appropriate section of the report). Fishes collected were either identified in the field and released or preserved in the field and returned to the laboratory for identification. Habitat data were recorded for each site at different spatial scales.Within these [...]

Collections of fishes used for data analyses in the project:

Historic and Current Habitat Use by Arkansas River Shiner in the South Canadian River in Central Oklahoma as Affected by River Flow: Predictions for Habitat Under Future Climate Scenarios”. Edie Marsh-Matthews and William J. Matthews. Funded and published by the Great Plains Landscape Conservation Cooperative.

Collections were all made by seines of a variety of sizes and mesh widths (details for collections are in the appropriate section of the report). Fishes collected were either identified in the field and released or preserved in the field and returned to the laboratory for identification. Habitat data were recorded for each site at different spatial scales.

JIMMIE PIGG/RANDY PARHAM DATA (MACROHABITAT)The late Jimmie Pigg, Oklahoma Department of Environmental Quality (DEQ), made seasonal collections at two sites on the South Canadian River within the GPLCC (Bridgeport, OK and between Wanette and Byars, OK) from 1976 to 1998 (Pigg 1991; Pigg et al. 1999). Each site was typically collected three times a year. Following Mr. Pigg’s death in 1999, the DEQ had Mr. Randy Parham (who had collected extensively with Mr. Pigg) continue collections at these sites approximately once every three years. These collections provide the opportunity to assess abundance of Arkansas River shiners (ARS) with respect to habitat/environmental characteristics at the scale of the entire reach and to explore the variation in ARS abundance over time in light of habitat variation. Since the 1970s, when Mr. Pigg began these collections, Arkansas River shiners have declined across their range (Pigg 1991; Pigg et al. 1999) including in the South Canadian River within the boundaries of the GPLCC (see below). These collections also allow us to ask if there have been changes in habitat or environmental features that may relate to ARS decline.

USFWS ANNUAL ARS SURVEY DATA (MACROHABITAT)The Tulsa Field Office of the USFWS has made annual collections at 6 sites in the South Canadian River in central Oklahoma since 2007. In 2007-2009 these sites included (in order from upstream to downstream: Bridgeport (Site 1), Caddo-Jake (Site 2), Union City (Site 3), Norman (Site 5), Purcell (Site 6) and Wanette (Site 7). In 2012, a collection was made at Mustang (Site 4) (between Union City and Norman), but no collection was made at Purcell. In 2007-2009, all collections were made in a several day period in June. The collections in 2012 were made in over a two-day period in October. On the first day, for the collections at Bridgeport, and Caddo-Jake, the water temperature was warm, but on the second day of collecting, water temperature had dropped substantially. The sites with low water temperatures in October 2012 were sites 4 to 7. At all sites the substrate was sand, with only occasional mud noted.

SOUTH CANADIAN RIVER WJM DATA 1976-1977 (MESOHABITATS AND MICROHABITATS):From May 1976 to January 1977, W. Matthews seasonally sampled fish, measured microhabitat features, and estimated mesohabitat features at individual point seine hauls in the South Canadian River (Matthews 1977; Matthews & Hill 1979a, 1980). His samples all were within one approximately 600 m reach of the South Canadian River west of Norman and east of Newcastle, Oklahoma, and the associated mouth of Pond Creek, with additional samples in upper Pond Creek, with 18 to 25 randomized points in the river proper or creek mouth, depending on seasonal water levels. For this report, we analyzed his data with each point sampled four times (once in the morning and once in the afternoon of two different days) in May 1976, August 1976, October 1976, and December 1976-January 1977. At each point Matthews made one seine haul that was typically 5 m long with a seine 3 m long and curved, so that approximately 10 m2 was included in each seine haul. For each seine haul he recorded the following habitat characteristics: mesohabitat type, structure, substrate, current, depth, dissolved oxygen, conductivity, turbidity, water temperature, pH and shade. Matthews recorded number of ARS and numbers of other fishes (fish counted and released) in each seine haul. Mesohabitat, following designations of Polivka (1999) were also assigned to each seine haul from Matthews’ original field notes. Discharge (at Bridgeport, OK, the nearest consistent USFWS gage) on dates sampled ranged from 7 cfs to 252 cfs.

Although some sample points in Matthews’ study were in Pond Creek, upstream of its confluence with the South Canadian River, the analyses in this chapter focus only on sample points that were in the river itself, or in the lower part of Pond Creek at and near its confluence with the river. It does not include any of the data from “upper Pond Creek” (WJM dissertation) because the upper creek samples were a substantial distance from the river, and often the upper creek was disconnected from the river proper, with no possibility for fish to move between the upper creek and river.

SOUTH CANADIAN RIVER AT I-35, NORMAN, POLIVKA SAMPLES 1994-1996 (MESOHABITATS AND MICROHABITATS)History and Previous Analyses: In two defined study years, with samples in 1994-1995, and 1995-1996, Karl Polivka, a Master of Science graduate student under Matthews’ direction, carried out extensive assessment of microhabitat use by ARS in three reaches of the main South Canadian River from the I-35 bridge at Norman to the bridge on US 77 between Purcell and Lexington, Oklahoma (Polivka 1997; Polivka and Matthews 1997; Polivka 1999). Based on analysis of all three locations, Polivka (1999) reached important general conclusions about ARS microhabitat and mesohabitat use. He concluded that ARS “used many microhabitaats and the patterns varied seasonally and ontogenetically”; that “no single physicochemical feather was linked to high density” of ARS; and that microhabitat use by ARS “is characterized by a mosaic of habitats used during different phases of its life cycle” (Polivka 1999). Polivka (1999) concluded that adult ARS were associated with different habitat variables during the two different years of study, and that the only feature in common was use of midchannel mesohabitat. However, he also found that during hot summer conditions adults used deeper, more thermally stable backwater habitats more than the main channel (Polivka 1999). He also found that juveniles used shallow, warmer, and slower-flowing backwater “nursery” habitats more than did adults, consistent with our own observations (WJM, personal observation). Polivka’s (1999) conclusion overall was that ARS is a “wide ranging species that does not demonstrate a substantial or consistent level of habitat selection”, and thus that maintenance of a natural riverine “habitat mosaic” was important to protection of the species.

Collect species and habitat data for analysis related to minnow and fish populations on the South Canadian River of Oklahoma. 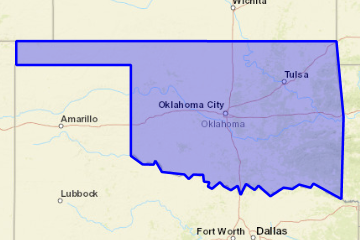