Objective 1 was to produce a map of critical habitat for an indicator species, the Greater Prairie-chicken, across the GPLCC. Critical habitat is defined as habitat necessary for lekking and nesting. The model allows us to identify and map critical habitat areas of high suitability which could be designated for conservation, and areas of moderate suitability that could potentially be restored to maximize habitat suitability. This map also allows conservation managers to identify areas of low suitability where habitat reclamation and conservation may prove too costly or impossible to restore or preserve and so could be considered for other anthropogenic uses. The methods used to develop this model are robust and will function as a tool that can be easily adapted for use with other grassland species of concern. Objective 2 of this project was to create a map of dispersal habitat, which we defined as habitat necessary to allow movement and connectivity among populations. This model highlights habitat areas critical for sustaining genetic connectivity and population genetic integrity of Greater Prairie-chicken populations across the GPLCC. Objective 3 has two aspects. The first aspect was to modify the critical habitat model to include climate data from the WorldClim data set. By assessing the current climate envelope of prairie chickens, we will be well prepared to forecast how Greater Prairie-chickens will respond to climate change in the future. The second aspect of objective 3 was to join the critical habitat model (including climate data) with the connectivity habitat model to create a comprehensive geographic model of critical conservation areas for the Greater Prairie-chicken across LCC region 7, the Great Plains Landscape Conservation Cooperative. 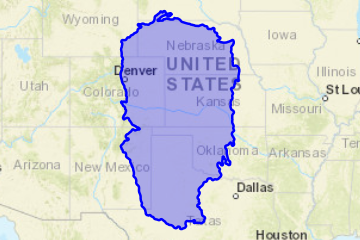