This dataset identifies large and medium rivers within the Connecticut River watershed that provide habitat for five anadromous fish species: American shad, blueback herring, shortnose sturgeon, alewife, and sea lamprey. Habitat includes the mainstem and major tributaries of the Connecticut River from the mouth of the river upstream to the limit of passability for these species. This layer is derived from a product entitled "diadromous fish habitat in the Connecticut River watershed" developed in 2010 by The Nature Conservancy, Connecticut River Basin Program. Digital data updates were performed by Renee Farnsworth working with USFWS personnel through the NALCC. Specifically, river segments identified and known to be accessible to the five species listed above were extracted from the diadromous data layer, and each river segment was assigned a score from 1-5 indicating the number of species having known access to the segment. In addition, each segment was scored as “free-flowing,” “impounded” or “unknown.” All river sections with a score >0 for the five focal species are included in the final set of lotic cores. 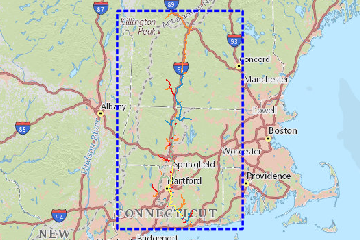