Background The Long Island-New Jersey (LINJ) coastal drainages NAWQA study is one of the 1994 set and is coordinated from our West Trenton, NJ office. Tasks for the first two years, 1994-95, included staffing, developing a liaison process, analyzing existing data, and designing a data collection program that started in 1996. These planning activities lead to the study design for 3 years of intensive data collection in 1996-98. The intensive efforts includes multi-scale study approaches to collect samples of water, suspended and bed sediment, biologic tissues, and aquatic communities. The LINJ NAWQA study is scheduled to enter a low-intensity phase of monitoring and report writing in 1999 and return to another 3 years of intensive [...]

The Long Island-New Jersey (LINJ) coastal drainages NAWQA study is one of the 1994 set and is coordinated from our West Trenton, NJ office. Tasks for the first two years, 1994-95, included staffing, developing a liaison process, analyzing existing data, and designing a data collection program that started in 1996. These planning activities lead to the study design for 3 years of intensive data collection in 1996-98. The intensive efforts includes multi-scale study approaches to collect samples of water, suspended and bed sediment, biologic tissues, and aquatic communities. The LINJ NAWQA study is scheduled to enter a low-intensity phase of monitoring and report writing in 1999 and return to another 3 years of intensive study again in 2005-2007.

It is interesting how perceptions and needs haven't changed much since 1894, just the wording -- "The need of wholesome water for household consumption, as also good water for use in the arts, has prompted many inquiries about the available sources from which steady and abundant supplies of such water may be had, and the large number of these inquiries has demonstrated the necessity of gathering all of the facts relative to the occurrence of waters on the surface and in the earthy and rocky beds under it" (from Cornelius Vermeule, 1894, Geological Survey of New Jersey, Report on Water Supply-- Water power, the flow of streams and attendant phenomena).

Since the time of Vermeule, the LINJ study area has continued to grow and is one of the more densely populated areas of the nation. The 1990 population of the 6,000 square mile study unit is more than 10 million people, concentrated particularly on Long Island and in northeastern New Jersey (figure 1) . There is almost two centuries of a strong and prosperous industrial economy supported by this population, largely centered around the ports of New York City and Philadelphia. There also is a very productive agricultural heritage around the fringes of these metropolitan areas and in the more rural areas of southern and western NJ and eastern LI (Land use, figure 2a). These fringe areas, however, are rapidly becoming urban and suburban communities (figure 2b). Currently, agriculture accounts for 12% of the land use in the study area. The remaining 88% is split about equal between urban and forest/wetland/other. There was a 9% increase in urban and subsequent decrease in forest and agricultural land uses between 1973 and 1990. The population growth for the same period was about 8%.

About two-thirds of the study area (figure 3) is in the Coastal Plain and is characterized by flat to gently rolling topography of unconsolidated sedimentary (NJ and LI) and glacial (LI only) deposits, extensive aquifer systems, and streams dominated by groundwater discharge. The other one-third, north of the Fall Line in northeast NJ (the Piedmont and New England provinces) is characterized by rolling to hilly topography of weathered bedrock throughout and glacial deposits in the northern half of each, fractured bedrock or valley-fill aquifers, and streams dominated by surface-runoff.

Total withdrawals for water supply in the LINJ is 1,617 million gallons per day. Surface water accounts for 37%, mostly in northeastern NJ. Groundwater accounts for 63%; 44% of which is in the LI Coastal Plain, 37% in NJ Coastal Plain, and 19% in northeastern NJ. Only 20 to 40% of the total water use is groundwater from the deeper, "confined" aquifers. As a result, much of the water supply in the LINJ is from surface water or surficial groundwater sources and is, therefore, highly vulnerable to contamination.

Major Issues and Goals of the Study

The LINJ liaison committee identified two broad water-quality concerns in the study area, they are: (1) the effects of nonpoint-source runoff and, to some extent, point discharges on streams, lakes, and estuaries; and (2) the vulnerability of public and domestic water supplies to contamination from urban, industrial, and agricultural land use. Toxic substances (VOCs, pesticides, and trace elements) are understanably of greatest concern. Unfortunately, the current scientific understanding of processes governing the presence, distribution, fate, and biological effects of these contaminants is limited. Nutrient loading is a concern within the study area. It is important to the aquatic health of streams, lakes, and receiving waters like the New York/New Jersey Harbor Complex and Barnegat Bay. Nitrate concentrations have been found to exceed water-quailty criteria in some shallower groundwater systems of the area used for water supply.

The large population, extensive urban and industrial development, and, in some areas, agricultural activities are the main causes of water-quality problems. The LINJ liaison committee recognizes that the NAWQA program can provide additional data and understanding to facilitate development of management strategies of these problems. For our data rich study area, we believe the typical NAWQA design strategies for occurrence and 'multiple lines of evidence' coupled with the use of some modeling approaches will be quite effective in filling in some important data gaps. More so, these efforts should help in developing a better understandingof the principal sources and processes needed to address the more important issues.

For example, we hope to build extensive surface-water data sets of nutrients, pesticides, VOCs, and biology for study area streams. The data sets will not only be useful in relating contaminant occurrence to land use, but we hope to tease out the major factors for observed differences in aquatic communities from these 'multiple lines of evidence'. We are also building an extensive data set for nutrients, pesticides, and VOCs in groundwater. When coupled with source and fate studies (atmospheric, unsaturated, and flow path), this will allow us to better relate shallow groundwater quality to land use, to help identify sources for and estimate the fate of specific contaminants, and perhaps say 'what systems are more vunerable and what might be done about the problems'. We have made significant progress in FY96-98 towards that end. Link to simple map and bullet summaries of LINJ study findings to date (Sept 1998) 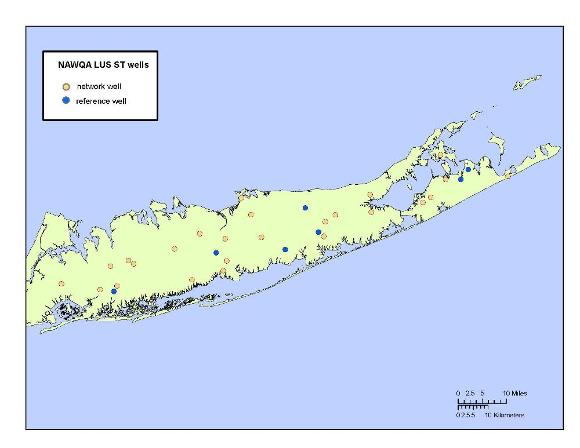 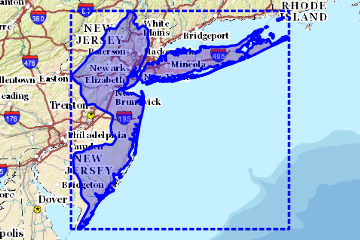