Blueprint 2.0 This layer is an older version of the South Atlantic Blueprint. The Blueprint prioritizes areas for shared conservation action in the South Atlantic geography. Priorities in Blueprint 2.0 are driven by natural and cultural resource indicator models and a connectivity analysis. Click here to learn more about the indicators. The Conservation Blueprint is a living spatial plan for sustaining natural and cultural resources in the face of future change. More than 400 people from over 100 organizations have actively participated so far in developing the Blueprint. Click here to learn more about the Blueprint. Background The lands and waters of the South Atlantic are changing rapidly. Climate change, urban growth, and increasing [...]

The Conservation Blueprint is a living spatial plan for sustaining natural and cultural resources in the face of future change. More than 400 people from over 100 organizations have actively participated so far in developing the Blueprint. Click here to learn more about the Blueprint.

Background
The lands and waters of the South Atlantic are changing rapidly. Climate change, urban growth, and increasing human demands on resources are reshaping the landscape. While these forces cut across political and jurisdictional boundaries, the conservation community does not have a consistent cross-boundary, cross-organization plan for how to respond. The South Atlantic Conservation Blueprint is that plan.

In 2012, developing a Conservation Blueprint became the 3-5 year mission of the South Atlantic Landscape Conservation Cooperative (LCC). In 2013, the Cooperative adopted natural and cultural resource indicators as shared measures of success. In 2014, the Steering Committee approved Blueprint Version 1.0. This first version of the Blueprint was created by combining expert input from workshops with existing regional and state plans. Click here to access Blueprint 1.0 in the Conservation Planning Atlas.

Intended Uses
Due to its coarse resolution and broad scope, the Blueprint is not intended for use in isolation of other more locally and/or resource specific layers. Instead, it is designed to complement other more detailed information by identifying the best places for shared action at the ecosystem level.

Known Issues
Coarse and missing data for marine priorities
Indicator data for much of the marine environment was especially coarse, with large areas of missing data. Non-hardbottom nearshore areas and areas east of the shelf break should be viewed with particular caution.

Undervalues certain areas near high priority hubs with strong restoration potential
Some areas near, but not directly adjacent to, high priority hubs, have strong potential for restoration and broad landowner support for conservation actions. Ideally, these would have been prioritized more highly in the Blueprint. One example of where this occurred is the Black River Mingo Creek area near Winyah Bay.

Insufficient aggregation of patches in some areas with multiple embedded ecosystems
In some areas, priorities within adjacent ecosystems diverged enough from each other that it created a speckling of high priority areas near hubs of highest priority. The area near Okefenokee National Wildlife Refuge is a good example of this issue. This speckling occurred despite the inclusion of landscape indicators covering multiple ecosystems.

Corridor routes do not account for locally specific opportunities
The current corridors simply take the least cost path through high priority areas. These costs are based on the priority itself and don't incorporate other costs of implementing a corridor. In many cases, locally specific opportunities could improve the route of the corridor. For example, in areas near cities, it will likely be easier to route corridors through areas important for that city's water supply. This is not accounted for in Blueprint 2.0.

Some agricultural lands not easily assigned to an ecosystem may have been undervalued
A small amount of agricultural lands, particularly near the coast, could not be assigned to an ecosystem due to the challenge of determining what ecosystem would have existed there naturally. These areas were not prioritized using the indicators and could only contribute to the Blueprint as part of corridors. While these areas are not in pristine condition and probably would not have appeared in one of the other Blueprint priority categories, it is possible some specific areas were overlooked.

Development
The prioritization in Blueprint 2.0 is based on natural and cultural resource indicator models and a connectivity analysis. An earlier draft of Blueprint 2.0 was reviewed at workshops across the Southeast in March and April 2015, attended by about 185 experts from more than 60 organizations. A later draft for review reflected changes made in response to workshop feedback.This final version of 2.0 incorporates those post-workshop changes, as well as feedback received on draft Blueprint 2.0 during a one month comment period.

Selection algorithm
For each ecosystem, except for the open water portion of estuaries and freshwater aquatic, we used the core area Zonation algorithm. This algorithm focuses on minimizing indicator loss and maintaining a balanced representation across all indicators. It begins by including all potential cells in the Blueprint and iteratively removes cells that will result in the least relative indicator loss. The first cell removed is the lowest priority and the final cell retained is the highest.

According to the Zonation manual, core area Zonation “tries to retain core areas of all [indicators] until the end of cell removal, even if the feature is initially widespread and common. Thus, at first only cells with occurrences of common features are removed. Gradually, the initially common features become more rare, and cells with increasingly rare feature occurrences start disappearing. The last site to remain in the landscape is the cell with the highest (weighted) richness. This is the site that would be kept last if all else was to be lost” (Moilanen et al. 2014).

--Run stability: when running core area Zonation within each ecosystem, there were often multiple valid solutions to the prioritization defined in the run. This is common in spatial prioritization where there are multiple ways to design a landscape and produce the same outcomes. However, to ensure the data-driven Blueprint process was transparent and replicable, we tried to select run options that would result in similar results if repeated using the same data by another group. We defined stable run options as a set of options where the average indicator coverage in the top 20% of priorities changes no more than 5% with multiple runs with indicators input in different orders.

--Patch aggregation with minimal indicator loss: aggregation is already incorporated in some of the indicators. In testing model runs with additional aggregation, our testing indicated that for some ecosystems additional aggregation better captured other species and habitat characteristics of interest not selected as indicators. Habitat patch quality, quantity, and configuration directly affect species’ long-term viability and ecosystem processes within each ecosystem. Aggregation is also helpful when uncertainty exists (Moilanen and Wintle 2006) and to reduce overall management costs (Moilanen et al. 2014). Furthermore, the additional constraints imposed by patch aggregation often helped improve run stability in certain ecosystems.

--Rule set for selecting run options: for ecosystems covering large areas (marine, forested wetland, pine, and upland hardwood), we began by running edge removal with no BLP. If runs were stable, we continued to increase the BLPs until there was less than a 5% loss in average indicator coverage. If runs were not stable, we increased the BLP until the runs stabilized. In the marine environment, based on reviews of earlier drafts and to further improve stability, we included an additional layer in the model runs representing ecological depth zones produced by The Nature Conservancy’s South Atlantic Bight Marine Assessment. In the pine ecosystem, due to computational limitations, we used an option (warp factor) to remove blocks of 10 pixels at a time from the prioritization. In forested wetlands, also due to computational limitations and the embedded nature of the ecosystem, we did not include a BLP.

For ecosystems covering smaller areas (maritime forest, beaches, freshwater wetland, estuarine marsh), we began by running without edge removal and without a BLP. These ecosystems tended to be small, embedded in other ecosystems, and computationally fast, so they were less appropriate candidates for edge removal. If runs were stable, we continued to increase the BLPs until there was less than a 5% loss in average indicator coverage. If runs were not stable, we increased the BLP until the runs stabilized.

Approach for freshwater aquatic and open water estuaries
Freshwater aquatic and the open water part of estuaries were treated differently than the other ecosystems. Freshwater aquatic indicators were summarized at a coarser resolution (catchments and HUC12),and ensuring high values for both indicators was particularly important in the prioritization. For these reasons, we used HUC12s as the selection unit (instead of 30 m pixels) and used the additive benefits algorithm in Zonation. Additive benefits maximizes the overall indicator representation (as opposed to core area Zonation, which all attempts to maintain a balance across indicators).

The open water portion of the estuaries was only covered by one indicator (the Coastal Condition Index) and therefore could not be prioritized within Zonation. Instead, we used areas rated 4.0 and above (“good”) to define the highest priority areas.

Connectivity Analysis
We used Linkage Mapper in ArcGIS to do the connectivity analysis.

To define resistance in the open water estuaries and marine, we rescaled and inverted the Coastal Condition Index indicator (estuaries) and the marine prioritization (marine) to ensure they used the same scale and that high values represented high resistance.

Connectivity across all other ecosystems
To define hubs within the LCC boundaries, we combined the indicator priorities from all other ecosystems and selected 2000 ha (5000 acre) aggregations within the top 10% of the priorities. This size threshold from Hoctor et. al (2000) is also used by the neighboring LCC to the South for connectivity purposes.

To define hubs and resistance outside of the LCC boundaries, we used local connectedness from The Natural Conservancy’s Southeast and Northeast Resilience project. For hubs, we selected 2000 ha aggregations that were both >= 1 standard deviation above average and within 26.1 km of the LCC boundary. The distance of 26.1 km is based on dispersal distances of subadult black bears (White et al. 2000), a species that disperses from within the LCC into all other adjacent LCCs.

To identify the top 20% of corridors, we first ran Linkage Mapper with the default options, plus settings to prune corridors if a hub was connected to more than 4 of its nearest neighbors. We then removed the bottom 5% of resulting corridors based on cost-weighted distance. The bottom 5% of corridors tended to be particularly long corridors moving through a large amount of high resistance areas. We then retained pixels within the top 20% of the remaining least cost corridors.

Priority Categories
Highest priority for shared action
The top 10% of areas generated by the indicator prioritization are defined as highest priority for shared action. This collection of areas makes the greatest contribution toward the persistence of the natural and cultural resource indicators. They will likely remain important places for collaborative conservation into the future.

High priority for shared action
The top 10-25% of areas generated by the indicator prioritization are defined as high priority for shared action. This collection of areas makes a large contribution toward the persistence of the natural and cultural resource indicators. While this supports their current importance for collaborative conservation, their priority level may change in future versions of the Blueprint.

Medium priority for shared action
All areas in the top 50% generated by the indicator prioritization---not already defined as highest, high, or corridors---are considered medium priority. This category identifies areas in better-than-average condition that are potential candidates for restoration. Adding medium priority brings the total area covered by the Blueprint to 50% of the South Atlantic geography. 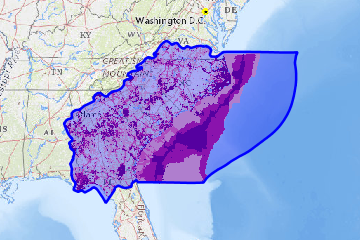