A resource selection function modeling approach was used (see Boyce et al. 2002) with pseudo-absences dispersed throughout the survey extent; row crop agriculture and urban classifications (NLCD: land cover classes 21-24) were excluded. A logistic regression compared Bachman's Sparrow presence with pseudo-absence points. This compared Bachman's Sparrow habitat use vs. availability.  As results of logistic regression are not directly relevant to assessing a resource selection function, data were divided into training data (60%) and validation data (40%). RSF's are relative measures of habitat use, but we wanted to determine a threshold for estimating presence/absence. Similar to other studies (Wilson et al. 2013; Fedy et al. 2014) we determined the optimal classification threshold with the training data, and applied it to the validation data.  We were primarily interested in how well the model performed in predicting presence and the proportion of area predicted.

The results showed canopy cover, evergreen land cover, canopy cover SD, fires, and connectedness were related to Bachman's Sparrow. After projection of these variables, we also discovered an association with habitat within a 5-km radius of a cell. The confusion matrix of the validation results showed 89% classification accuracy and further results are presented below:

Questions about Bachman's Sparrow modeling may be directed to Bradley Pickens, bapicken@ncsu.edu

Known Issues:
For Bachman's Sparrow, the model is trained and validated with North Carolina data and is extrapolated to the whole South Atlantic LCC. More data is needed to validate this extrapolation. However, habitat variables were chosen with specific reference to Bachman's Sparrow ecology. Fires, canopy cover, evergreen trees, and fragmentation are all known to be factors affecting Bachman's Sparrow throughout the southeast. Definitive absence data would be helpful for verifying the presence/absence threshold chosen here.

Taillie PJ, Moorman CE, Peterson MN (In review) The relative importance of multi-scale factors on the distribution of Bachman’s Sparrow and the implications for ecosystem conservation. The Condor: Ornithological Applications 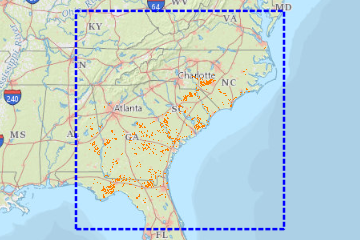