The Missouri glade distribution map is an effort to classify, describe, and map restorable glade natural communities throughout Missouri where thought to occur. Managed by the Missouri Department of Natural Resources, the data provide a baseline for land managing agencies, conservation organizations and private landowners interested in management and protection of glade habitats, and scientific study and monitoring. Spatial data about glades support active conservation assessments, resource management, and strategic conservation planning needs. Analysis of the data provides the structural framework for answering critical scientific questions about glade natural communities.

No liability is to be assumed by the Gulf Coastal Plains and Ozarks Landscape Conservation Cooperative or any of its partners for the use or misuse of this data. Data is to be considered preliminary, pending comprehensive review, and assumed to be current and accurate at time of release. Although all data in this data set have been compiled by the Missouri Department of Natural Resources, and/or American Bird Conservancy no warranty, expressed or implied, is made by the department as to the accuracy of the data and related materials. 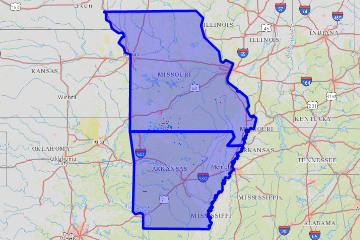