Reason for Selection
Acres of longleaf pine is one of the cultural resource indicators for the South Atlantic LCC. Longleaf pine was the predominant ecosystem at the time of colonialization, so it contributes to Native Americans’ ability to experience the landscape of their historical cultural heritage. It is also an important component of the type of landscape settlers encountered with westward expansion, characterized by niche economic activities like turpentining, which is no longer practiced anywhere in the United States

Spatial data for the FIA unit boundaries were created by editing a county boundary dataset to match the maps shown in state level FIA reports.

Known Issues
-- To better understand the accuracy of these acreage estimates, please review the sampling error information in the attribute table.
-- It would be preferable to be able to estimate longleaf pine acres by county. However, the sampling error associated with those estimates in the FIA data are large. Foresters for the FIA recommended that we look at the unit level estimates instead. 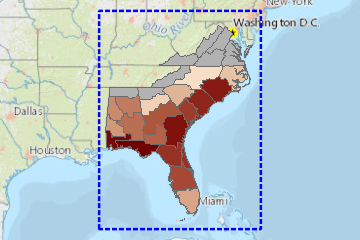